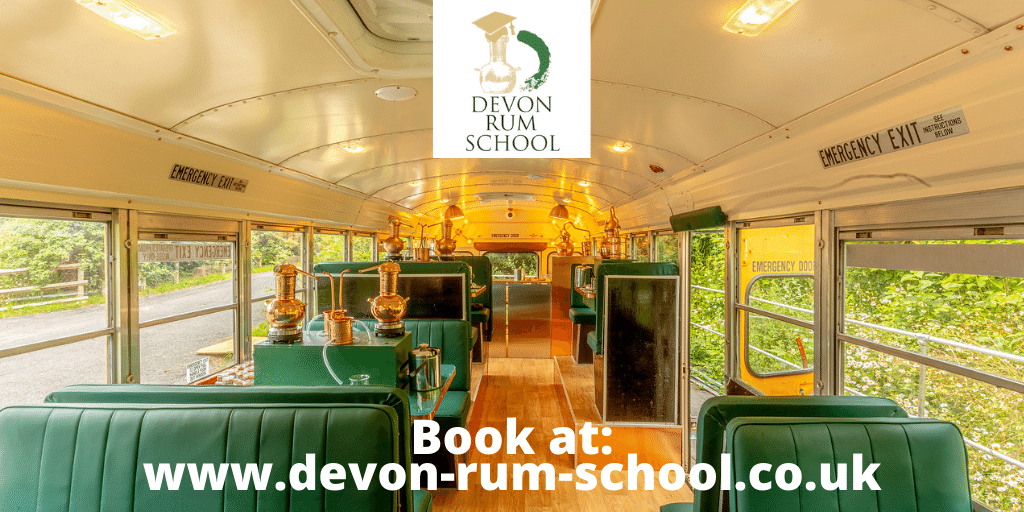 Although the bus was still in working order on purchase, it had not long cleared the port of Southampton when the head gasket blew on the vehicle. The bus was brought to the Shops at Dartington, where the team started to set about the project of converting it.

Over the last 18 months, the bus has gradually taken on its new design and now boasts 10 stills which can each be booked to make a bespoke bottle of rum. There is also a bar onboard serving a range of drinks.

The experience lasts approximately 2 hours, during which the class gets a welcome rum punch, while the tutor gives a brief history of the spirit. The class is then led through a tasting of the different types of rum and how the processes of making them differ. After this, each couple will choose the spices and flavours that they want their bespoke bottle to have. Whilst the spirit is distilling, each person is offered a further classic rum-based drink, whilst given the opportunity to use their creative flair in designing their own bespoke label for their bottle. Throughout the class, the lead distiller offers guidance and anecdotes around the history of this versatile spirit.

Cosmo Caddy has alcohol production in his DNA, his grandfather being the founder of Sharphams Vineyard. In 2012 Cosmo founded the Devon Distillery becoming the first producer of Grape Marc spirit in the UK. He went on to become the first licenced mobile distiller with his ‘Still on the Move’ a 1972 VW Pickup Truck aptly named Ginny. He later went on to set up, the gin distillery that has been on-site at the shops at Dartington since 2018.